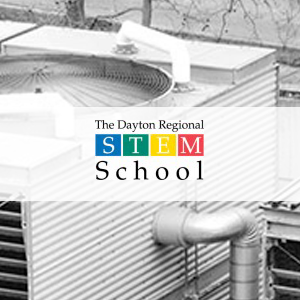 When the Dayton Regional STEM School had out grown its current facility an expansion was planned. The adjacent retail space offered the needed square footage for the project. The design build project was awarded to Messer Construction. The conversion of the space was to be completed prior to the August 14, 2013 first day of school. The first order of business was the selective demolition of the space. This work was undertaken by several specialty contractors.

Millwright Industrial Services was contracted to remove obsolete mechanical equipment from the building. MIS met with the Messer Safety Manager and outlined the procedures and safety precautions to be taken. Four air handling units were to be removed from roof truss system. Three of the units were relatively simple to lower and dispose of. The forth was a bit more challenging, the main electrical supply for the area was supported by the AHU’s framework. Working with the electrical contractor MIS was able to support the conduit and lower the AHU without incident.

The Story: How Millwright Industrial Services got started
Scroll to top